In the 1920s, when the section of the Mother Road was beginning to be paved through this part of Oklahoma, there was a clear dichotomy between “East” and “West”. This part of the country was dominated by dirt roads and horse-drawn vehicles, and the laying of a concrete ribbon of road to stretch clear across the country was the most blatant of notices that the vehicles of the future would be moving under their own power. This very dramatic (and perfectly rendered down to the last detail!) bronze sculpture made to one and a quarter scale to heighten the effect even more, portrays that contentious “meeting”.

Tulsa was the perfect place for this battle of technologies to develop. The Oil Boom reverberating through the newly minted State made a town bursting at its own seams from the start of its existence.  And there was “money to burn” to make it all first class. Many of Oklahoma’s “leading families” called this town “Home”. The architecture and infrastructure reflected a confidence that  the future would always be bright here.

The fuel that powered the Boom came readily out of the ground, and derricks like this were more numerous than trees. When one well would Strike Oil, others would pop up like mushrooms. Fortunes were made and lost in a matter of weeks and months.

The Railroads kept all things moving, while the Mother Road was still going through her “growing pains”. They were the “monsters of the Prairies”, and where they went, cities followed. Tulsa was the crossroads of four of the major rail lines of the era.

Just as an aside, this form of transportation is totally alive and well. Our Adventure Cycling Bike Route 66 seems to never be far from the major rail lines, and that is reinforced nightly when the train whistles echo through our campgrounds. They are the behemoths of freight movement, very often including multiple engines front, and rear of miles long collection of railcars. While traversing the mountains, they even added an engine (or two!) in the center of the train. On the days that my route ran directly along the tracks, it was a child-like thrill to coax a horn whistle out of an obliging engineer. 🙂 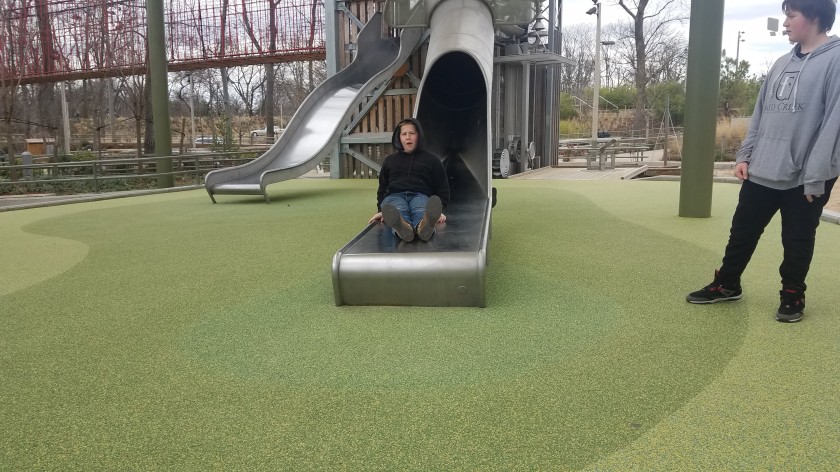 Lest you think Tulsa ignores the needs and wants of its younger citizens, consider the extravaganza of a “play place” that covers a city block area; its called “Gathering Place”, recently built on donated land and is superlative in so many ways that it won’t be adequately described here. Suffice to say that Izzy and Colin recreationed at full throttle with HUNDREDS other kids, for close to two hours without covering all the different structures and venues that were available FOR FREE FOR ALL. A wonderful bike trail and a separate hiking trail connect nearly 30 miles of neighborhoods and this park. It would have been fun to be a designer or a builder on any of these projects. Imagination was given top priority.

Note the whimsical “chicken legs” supporting the table Cathy and Tory occupy while enjoying the view of the kids playing and sipping hot chocolate!

Creativity reigns supreme, as slabs of some of the trees that were felled to make room for the park are turned into the back supports of benches located in the “lodge” area.  Many of the trees were “repurposed” as playstations by trimming most of the branches off, bark removed, and turning them “upside down” with the trunks uppermost. The kids seemed to love these unusual presentations of a most common part of their lives.

I feel guilty doing any complaining about the weather here after reading of all the flood devastation going on in Nebraska. Knowing the long-term affects these disasters have on farms and farm communities, I am heart-broken at the realization of how this event will negatively impact their lives long into the future.

There has not been as much riding as I would like, but hopefully the winds will lay down and temps inch up to allow all day riding.

Thanks for coming along! More Oklahoma awaits, with Kansas and Missouri warming up in the wings!

4 thoughts on “Tulsa and Route 66, Personification of East Meets West”