I clearly remember entering Texas on the Southern Tier ride on the eastern border two years ago and realizing just long it was going to take to cross that huge state on the route we would be following through the middle. This time, on Route 66, it won’t be nearly as long, but just the thought of “crossing Texas” gets your attention.

We all had different reactions to the stormy night of last night. At bedtime, Bridget was tossing and rolling like a ship at sea, but all went to sleep relatively quickly. Izzy has been fighting a persistent cold for the last few days and her sneezing is strong enough to add impetus to the degree of rolling! I am always more attuned to the sounds from outside than any of the family, so I awoke quickly when the forecasted rain started. It soon crescendoed to fortissimo, and startled Colin out of his loft bed. His solution to handling his uneasiness with the situation was to climb down and strike up an animated conversation with Grampa, who was very happy to just “listen to the rhythm of the falling rain”.  Izzy woke up just long enough to enquire if it was time for breakfast. Calm Cathy slept through it all. All part of “life on the Mother Road”. Our camp last night was also directly on Route 66, so there was no time lost getting on the road and heading for our planned stop for tonight at Amarillo, about 95 miles on east. 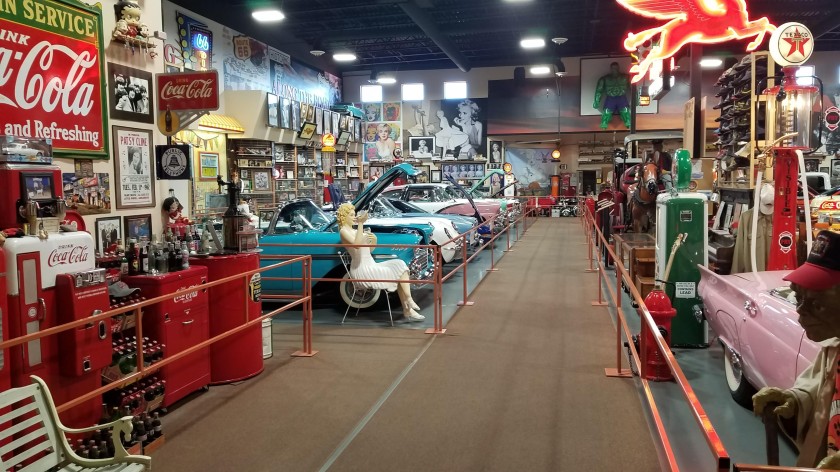 An unexpected delight surprised us near Glenrio, New Mexico. Not a single one of the many Route 66 guidebooks, nor my usually all encompassing Adventure Cycling Map info mentioned Russell’s Cafe on Route 66. For starters, it includes this very high quality classic car collection of more than 20 vehicles, and enough car paraphernalia to satisfy the most particular car lover. And, IT’S FREE! Not even a “suggested donation” bucket. Just go in and wander around to your heart’s content. And if you return in 6 to 8 months, there will be an entirely different collection of cars from the same owner, and the same thing for 12 to 14 months out, at which time the cars shown here will return for oohing and ahhing. It is advertised as a “Cafe”, and the food and decor of the 50’s persist there as well. And the prices were as reasonable as anyplace we have visited on the entire trip.  Quite an accomplishment considering the distance supplies need to travel to keep the cuisine fresh and tasteful. The final touch of naming the bathrooms for the King of Rock and Roll, Elvis, and the the women’s, Marilyn, for Star of the Fifties, was over the top! Highly recommended!!

It was a beautiful bike riding day today, and I shed my layers of clothing as the day went on. If there ever was such a thing as a good day to ride a “century”, it would have been today, with the paucity of hills and persistent tail wind. It would have taken an earlier start than what I did to make that happen, and the kids were all excited about having enough time to visit the famed and fabled “Cadillac Ranch”. I have seen many pictures of it over the years, but still didn’t have much of an idea of what it was all about. Well, now I’ve been there, and I STILL don’t have much of an idea of what it’s all about. Not a single person around to make any attempt at control of the visitors, or collect any type of payment. 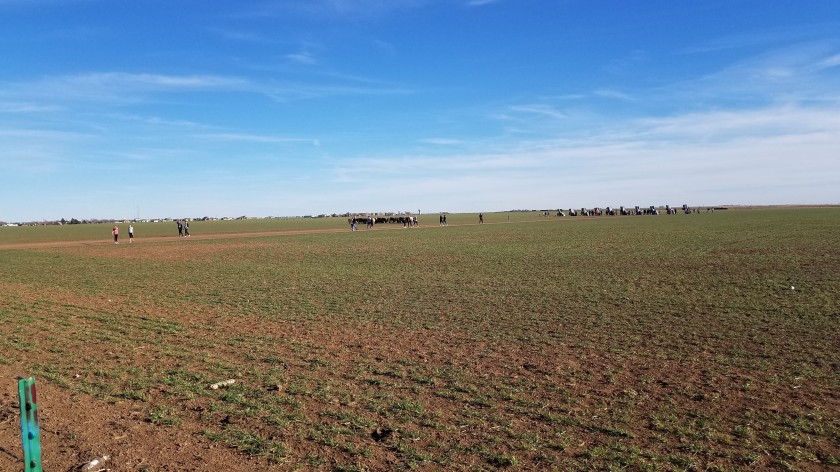 For specifics, ten old Cadillac cars buried to a similar depth (about one third of their length) at a precise angle, spaced at a precise distance apart from each, over a thousand feet from the boundary of a thousand acre wheat field being simultaneously grazed by several hundred yearling steers and mobbed by 150 to 200 people who let themselves in the gate and meandered across the field to the spectacle. Yeah, that’s about it. Oh, and there are a hundred or so used containers of spray paint thrown willy nilly near the cars for people to pick up and add their personal contribution to the color aura of the cars.

Izzy the Artist adding her touch to the rear deck of this 61 Caddy.

No surprise, Colin was more interested in just how many spray paint cans he could find that still had enough paint in them add another layer of semi-permanent beauty to these modern monoliths.

We’re looking at a “double whammy” from the clock tonight as we just crossed into the Central Time Zone from the Mountain Time Zone and lost an hour, and at 2a.m., Daylight Saving’s Time begins and we’ll “lose” another hour! We’ll have to sleep really fast tonight here in the Amarillo East KOA to stay sharp for tomorrow.

One thought on “And Now, Texas!”