Just to mix it up a bit, we’ll start out with the end point of today’s travel, Tucumcari, New Mexico. A Native American derived name, as opposed to the predominance of Spanish derived names of most of the towns we’ve traveled through, as in Santa Rosa, the place we left this morning. A totally cloud-covered sky as I rode out the front gate of our Campground, stopping to thank the owner, again, for finding and returning Izzy’s lanyard containing ALL her essential things (including Credit Card!). He took a few minutes to list some of the more “interesting” things he has found at the park. The most memorable was a handbag containing $18,000 cash accompanied by a fully loaded (as in, full magazine and a round in the chamber!) semi auto pistol! Needless to say, the local police were very interested.

It was my turn today to make use of the dual-use dry wash culverts. I was relieved that Cathy wasn’t following my exact route at this point as I’m sure she would have been MOST uncomfortable piloting Bridget through these Interstate shortcuts. If you note, the highwater marks on the walls would have made it an exciting transit at some point 🙂 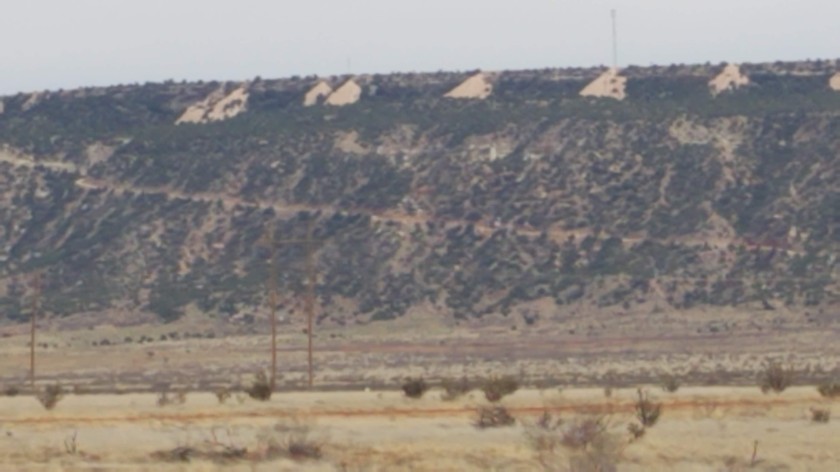 I consider myself fairly astute at interpreting the sights I see in my slow speed travels, but this one had (has) me stumped. I’m presuming some kind of mining activity, but the steepness and ruggedness of the approach road would limit the size and capacity of any trucks transiting it. More research, I guess. 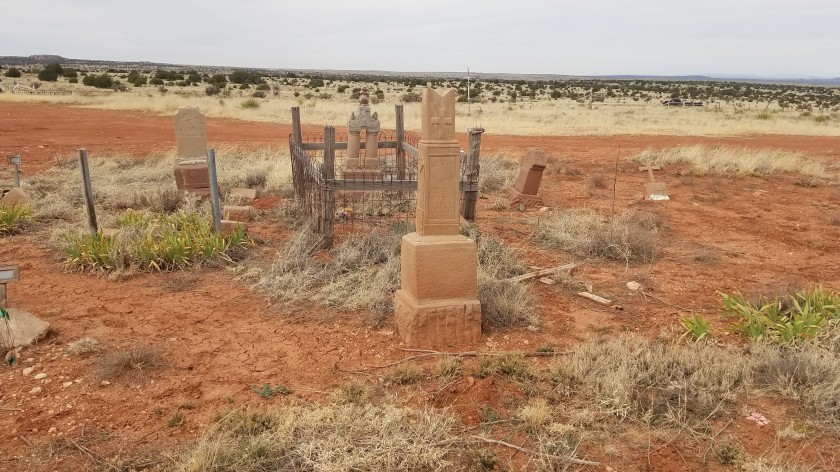 We were touched by this extensive family cemetery in very remote ranch country. We are outside the border fence, so didn’t feel like we were trespassing. Several of the stones were obviously hand hewn from the local rock and the inscriptions were lovingly chiseled on the faces of the stone. Some sadly young, and very young folks buried here, and their ancestors nearby. One of the earliest dates we could read was 1868. When politicians declare willy-nilly that the cattle industry needs to be “eliminated” to create a “green revolution”, there is little thought given to these centuries-long stewards of this fragile landscape as they attempt to make their living raising calves in a very difficult environment. They have my utmost respect.

Tucumcari markets itself primarily as an Original Route 66 town. This Blue Swallow Motel is listed in all the Essential Route 66 landmarks. Note especially the “100% Refrigerated Air” enticement, AND TV!! The late forties vintage car out front gives a good idea of when this establishment was new. It says there is a vacancy, but that is often not the case.

My route into town took me through the entire “strip” that was the original Route 66. Sadly, there are at least a third of all the businesses along the route that have failed to survive. I’ve decided not to add any of those pictures, but instead focus on the positive of those that have lasted all these many years.

Cathy took the kids to the TeePee Curios Shop and got some really nice pix, but, yet again, we can’t find a way to get them accessible to the WordPress site for adding here.

Our Bridget is swaying noticeably as winds are howling outside at 40 plus mph, and some forecasts for even stronger winds later tonight and rain. Going to be an interesting Night Along the Mother Road.

5 thoughts on “Another Friday along the Mother Road”