Our camp last night was directly on the combination of Routes 66, The Santa Fe Trail, and the Old Las Vegas Trail. The map recon before jump off this morning showed that within 7 miles, I would be climbing the Glorietta Pass, site of the furthest west battle of the American Civil War. I had Just time to get “warmed up” before a significant 1300 foot climb out of this valley and headed for the Pecos River Valley. Still being above 6000 feet, the morning was very cool, with promises of strong winds developing by mid morning. I opted for the “mid-range” clothing selection, leaving bare legs and no windbreaker jacket. 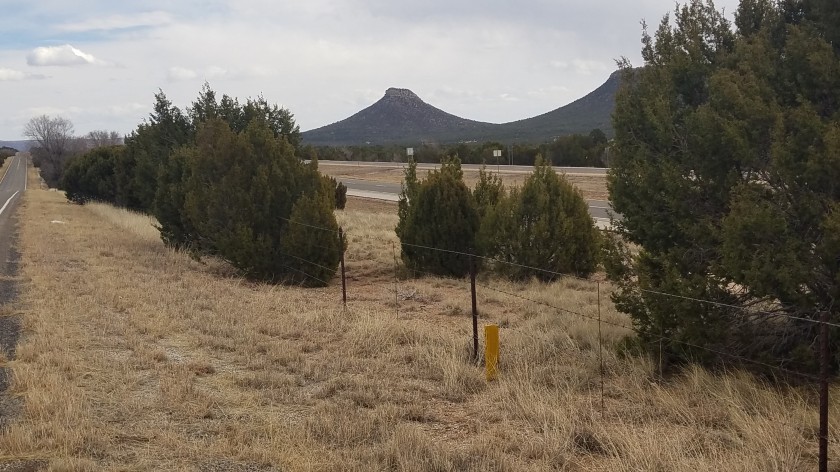 There is nothing particularly significant about this table-top mountain off in the distance, other than it was the furthest point I could see as I headed out on the road after getting Cathy and Bridget all checked out and ready to move out ahead of me toward our goal today of Santa Rosa, New Mexico. As often happens out here, there aren’t  many choices of stopping points if we want to actually be in a place that has one or more campgrounds and some supporting businesses. The ninety miles today between Santa Fe and Santa Rosa contained exactly zero of these requirements. I rode the first 60 miles enjoying an early tail wind boost over the aforesaid Glorietta Pass. The clothing choice was the right one as the long sleeved cotton shirt was sweat soaked by the time I crested the pass. Today was another case of the only roadway available in some sections being Interstate 25. The traffic this far east was not particularly heavy. The downside is that on a very windy day such as today, the wind blast from the passing semi trucks is a force to be reckoned with. It will move the bike (and me!) at least a couple of feet sideways in the instant that the air blast comes from the passing vehicle. The remainder of my riding time was spent on the combination 66/Santa Fe Trail and as long as my direction of travel was east or northeast, a joy to ride! Any veering off to the west or south was met with 25-30mph winds nearly head on.

Another very non-descript picture, but highlighting the degree to which I have entered into “really rural” New Mexico. The use of the culvert drains for the normally “dry washes” is a good dual use of highway structure, i.e., they are both drainage structures and road beds for the mostly unpaved roads of this part of the State. Works great as long as your vehicle is less than 10 feet high and 9 feet wide.  🙂

Wanting to arrive at Santa Rosa in time to secure a camp spot and do some Route 66 exploring, Cathy picked me up at the point where I would have started riding on Interstate 40. That thoroughfare is ALWAYS heavily traveled, and the wind was more than I wanted to deal with.

One of the often mentioned things to see in our Route 66 Book Library is the Classic Car Museum in Santa Rosa. After getting settled in at Santa Rose RV Park, we took the short drive there to investigate.

There was a sizable collection of neat old cars, and we decided we would each peruse the collection and pick out our favorites. Here’s how that went: 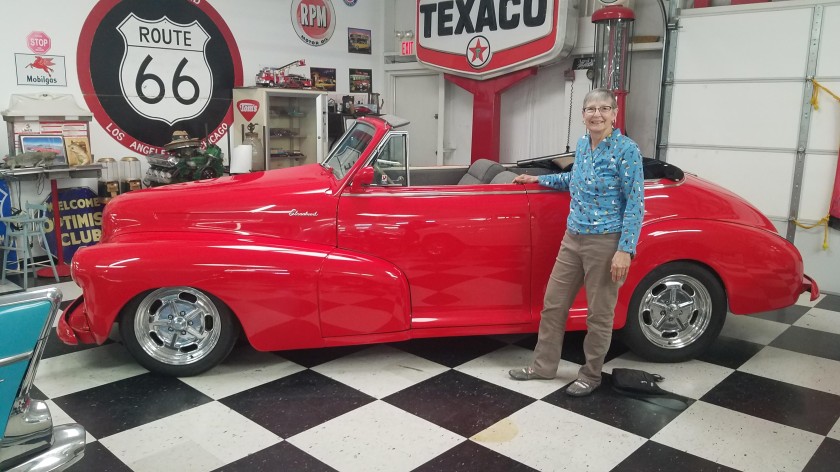 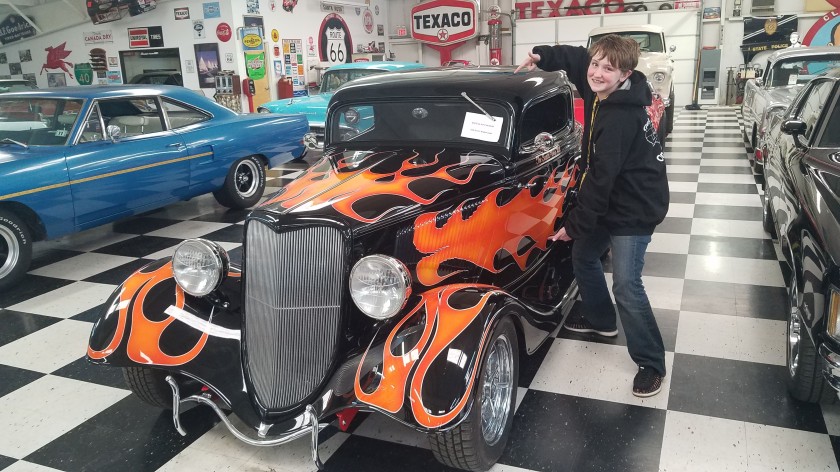 Izzy surprised us all with her choice of this totally tricked out 34 Ford Coupe, flames a flying every where! I was a little jealous that she got to it before I did.

Colin had a hard time deciding, but, not unexpectedly, settling on this meticulously redone 49 Chevy pickup. He hit me up for a loan to buy it! He thought it was ridiculously high priced at 28 grand, but I actually thought it was a fair price for this jewell. 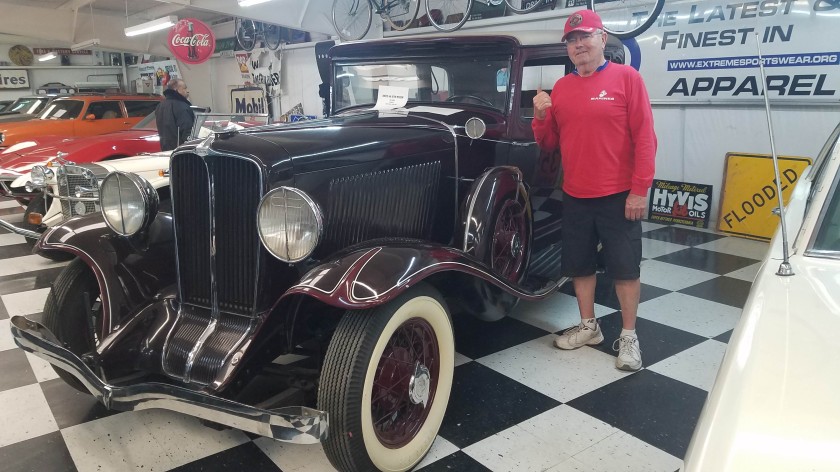 My choice was this 31 Auburn Touring Sedan, which was also for sale at $85,000! I felt a little guilty picking it as all my Model A Ford Club Friends would think i was “outclassing” them.  🙂

We unanimously voted as Best In Show this 47 COE Ford converted from over the road semi to whatever it is now. It was just too wild to deserve less.

Lots of stars from the 50s and 60s gracing the big exhibit hall, and Izzy thought she and the Original Rebel, James Dean, were soul mates, even though she had never heard of him until today.

Leaving out some interesting info on Native American history of the area, but will try to get it in on a slow day down the line. Wifi very ‘iffy’ here, so will cut this off.

Done in time for supper in the campground restaurant and enjoying MUCH warmer temps here at the lower elevation.

Thanks, as always, for coming along.

7 thoughts on “Glorietta, Hallelujah on the Wind Blown Trail”