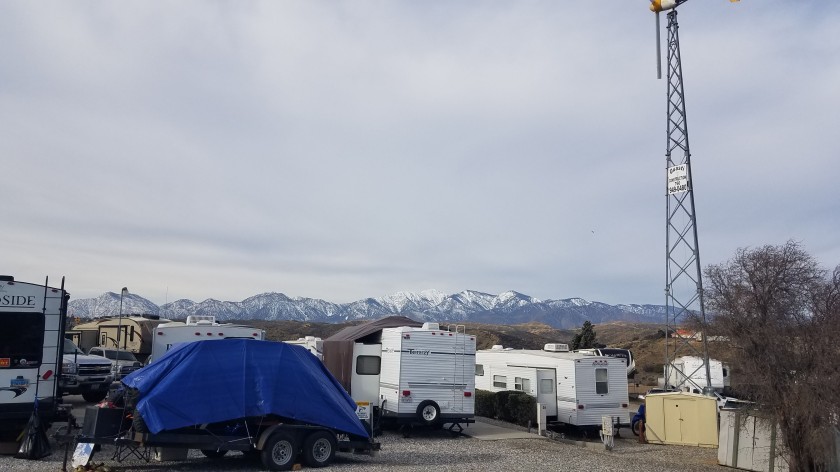 These mountains look so much better to me from this side! It was a much more gradual down slope than the upslope was on the other side. So today’s ride was a breeze, literally, since I even had a tail wind (ok, kind of a quartering wind, but NOT a head wind) for a good share of the day.  The goal for the day was Barstow, which was about 70 miles on down Route 66, with zero miles on the Interstate. It was a brisk 44 degrees on leaving camp, so I had on as many clothes as I’ve ever worn while bike riding. And, as it turned out, was just about right for the morning hours.

In to the high desert, and the town of Victorville. In the 30s, 40s and 50s this sleepy town was called “Little Hollywood” due to all the filming of TV Westerns and movies. Roy Rogers filmed many of his shows either here or at his ranch farther north near Apple Valley. The Cisco Kid and Zoro movies were filmed here. We had hoped to tour the recommended Route 66 Museum here, but found it was closed on Tuesday and Wednesday. 😦 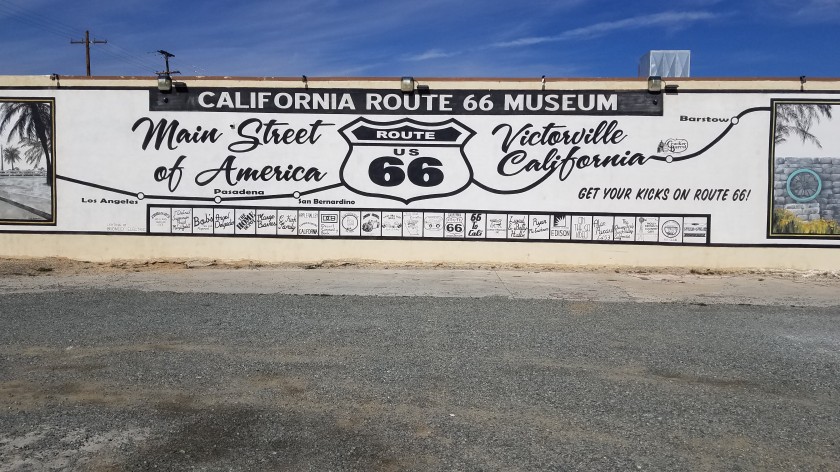 Having been stymied by this set back, we opted for another long-time Route 66 location, Emma Jean’s Holland Burger Cafe. It was close enough to lunch to make that a rational choice. This hasn’t-changed-a-bit-for-decades eatery was opened in 1947, and has served road-hungry travelers ever since. The same family still runs it, and we met Brian and Shawna and congratulated them on their successful enterprise. Emma Jean was Brian’s mom, and their Dad drove his cement truck back and forth on the road in front of the restaurant for 31 years! 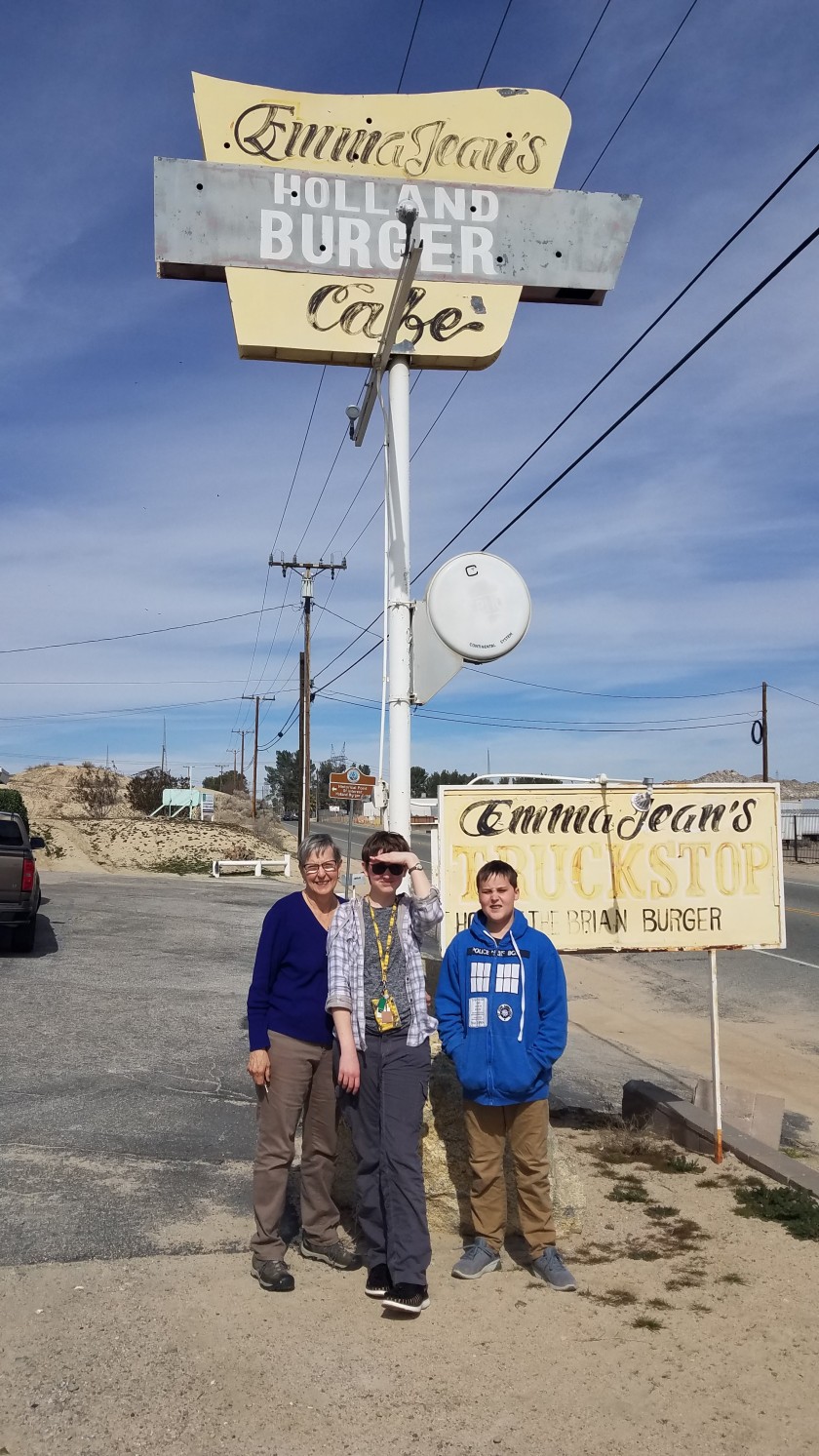 Izzy declared her “Brian Burger” the best burger she’s ever eaten! (I’m sure she meant other than the ones Grampa grills at home. 🙂  )

Truck traffic and automobiles shared our old Route 66 about equally. Cathy and the kids were, as per normal routine, gone ahead to scout out likely camps for the night. She reported that she needed to pull to the side of the road or far on the shoulder to allow built up traffic behind her to pass. They were all in a lot more hurry than she was.

Not too much farther down the road I came across another of the book-highlighted must-sees, Elmer Long’s Bottle Forest. Old Elmer has been creating “trees” out of iron skeletons and all manner of bottles for nearly 20 years. He just “enjoys” doing it, and doesn’t charge a thing for walking through the eclectic exhibit. Sadly, Cathy and kids were looking at something on the other side of the road when they passed and didn’t see it. I stopped for a nice tour, with many a subdued, ooh and aah! 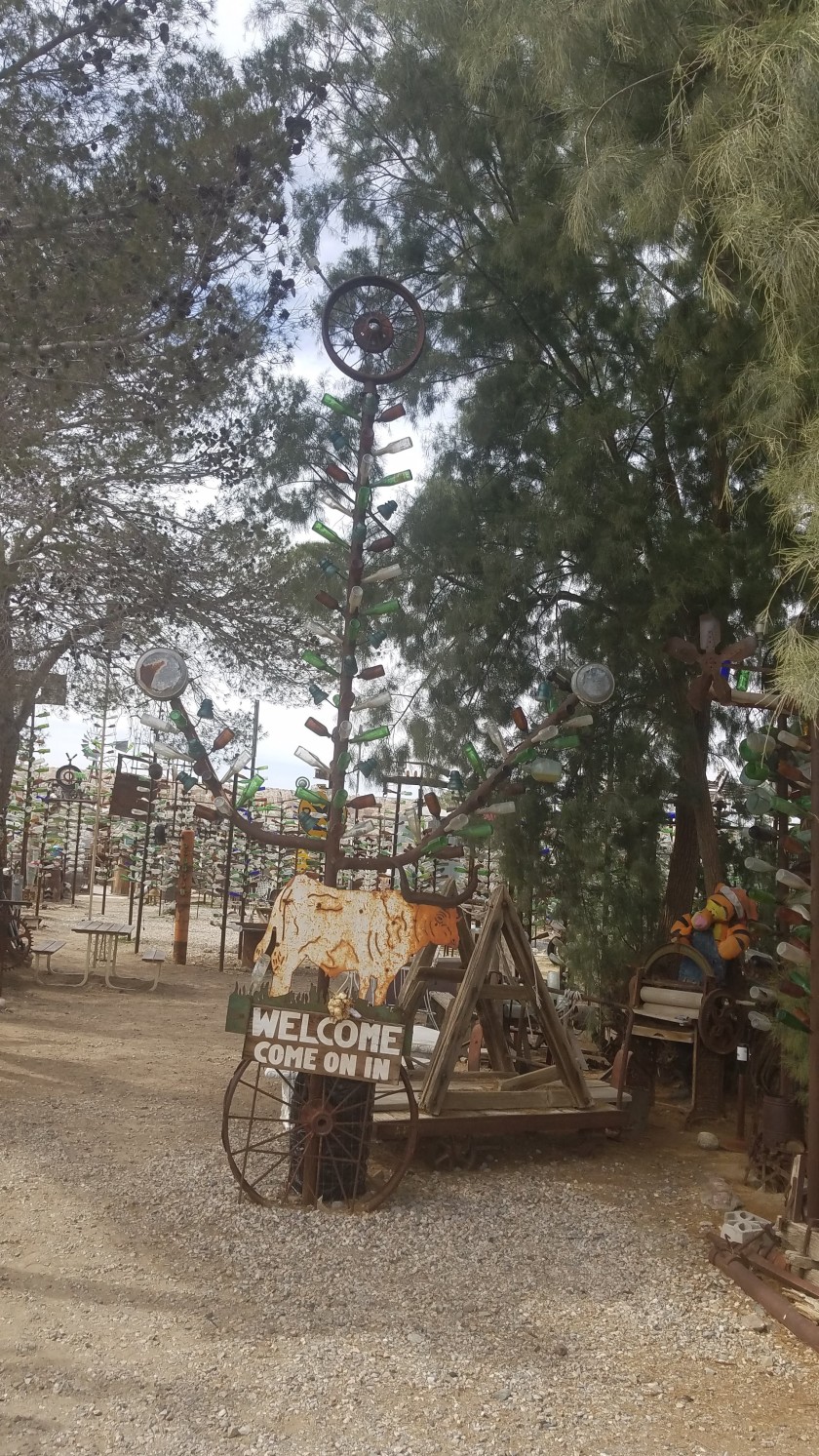 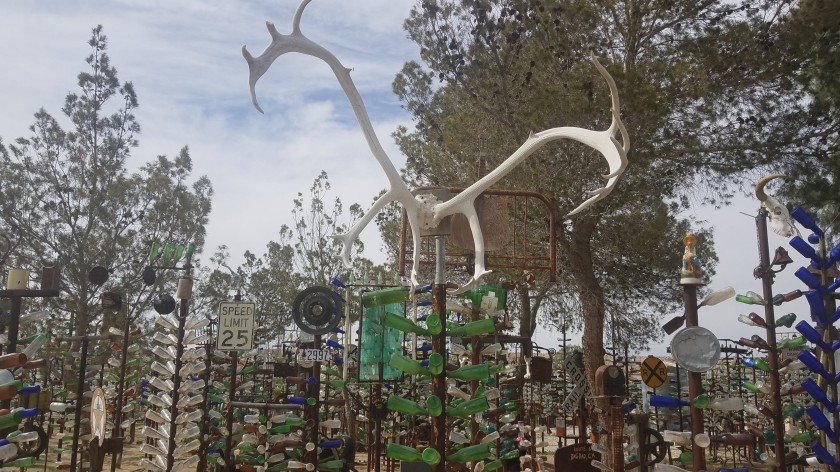 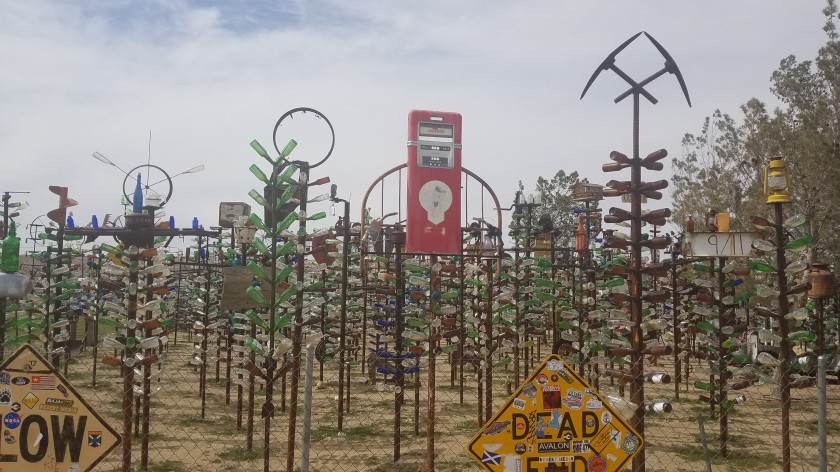 With quite a lot of miles yet to pedal, I ignored several other sites that caught my eye. The riding conditions were as good as can be hoped for, so I wanted to get to Barstow while they lasted. 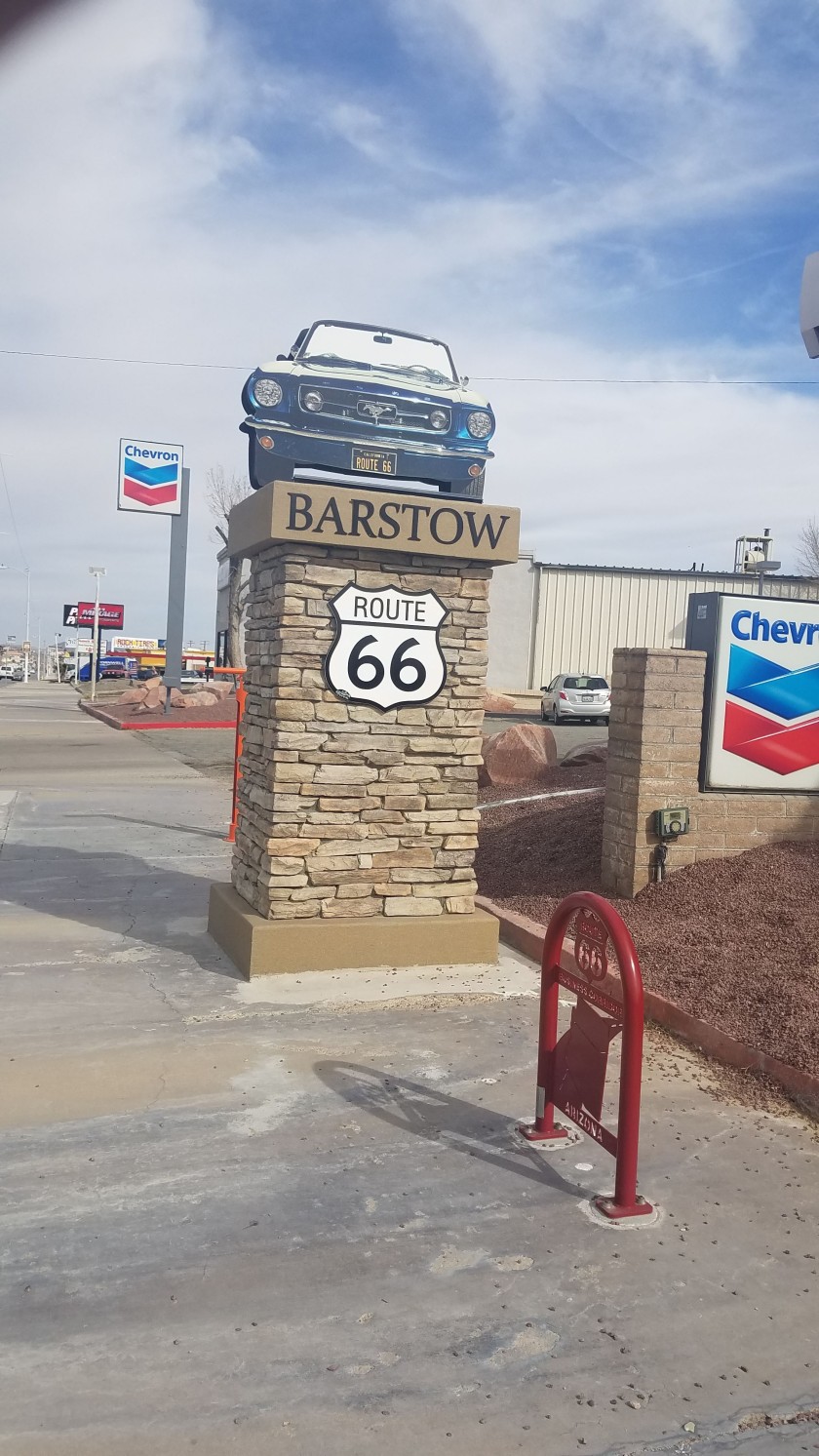 When the town name is part of “The Route 66 Song”, a picture of the place name is mandatory, and Barstow is in there!

We are staying in the exact same RV Campground as we did on the way out here in 2017 on the Southern Tour ride! This is about the only place on either route where the paths cross. 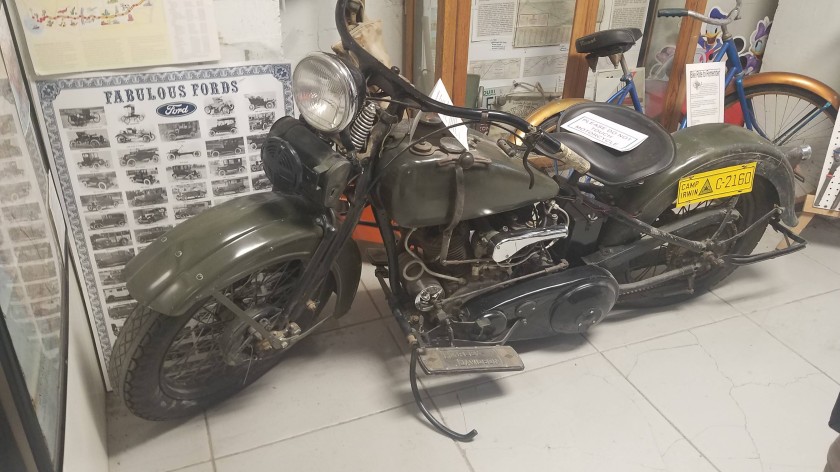 We thought we had been on the wrong side of the Museum schedule again when we drove into the old Railway Station, re-built Harvey House Hotel, and Barstow’s Route 66 Museum. The sign said they were only open Friday through Sunday (volunteers operate the facility). But, our luck had turned when they opened up on this Tuesday to accommodate FOUR busloads of JROTC kids from the 8 high schools in Vegas! We got there before the kids disembarked, so had time to do our souvenir buying before the battalion of kids swarmed in. I thought adding a pic of a 1931 Harley would show that I’m not totally prejudiced for bikes with pedals.  🙂 And as a sop to Dotti and Rick from back home.  🙂 Oh, and for our Sean, too, as he’s now a Harley Hog Guy.

Hoping for another good day tomorrow. We’ll be close to leaving California by then.

3 thoughts on “The Other Side of the Mountain”