Another chilly start to the day, but I elected not to add any layers knowing how quickly it was going to warm up. Our host, Mike, came over to chat as I was getting STella uncoupled from our full hookup to depart. There were only spots for 5 RV’s in the park, so I got the feeling Mike didn’t get to chat with many folks. He was a really decent sort with a lot of painful things in his past. Not my fault, people just start talking to me and tell me this kind of stuff. The least I could do was listen.

We often get campsites that are close to our line of march, but rarely are we only steps away from rejoining the ST route. That was the case today. I pedaled out of Duncan and Cathy drove back a few blocks to replenish ice and other supplies. I had just left town and the vista of a far off snow covered mountain top was framed neatly between two tall buttes. A butte can really be a beaut. Don’t you just love our English language? Don’t know why people think it’s so convoluted. 🙂

I’m pretty much constantly scanning the skies for bird life, mostly as a result of trying to spot them for Cathy so that she can try to identify them. There are a few hawks on her list that she would really like to add to her life list before she leaves this part of the country. This specimen, unknown to me at least, gave me a real good look as he was dissecting his/her morning catch.

We both knew that this stretch was going to be without anything spectacular on the route, and very few towns at all. In fact, the warning on the AC map sheet states “no services for next 77 miles”. That doesn’t take into account that spring is the prettiest time of year to be in the desert. So many kinds of desert plants blooming now. 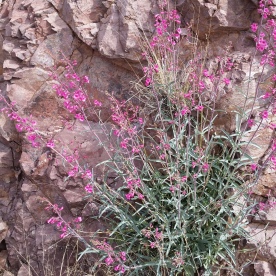 The colors are so eye catching, but it’s the tenacity of the plants and where they will sprout and grow that amazes me. The purple flowering plant was growing out of the bare face of a solid rock wall. And I saw many of the little yellow blooms growing in the tiny cracks of the asphalt road.

I hailed down an eastbound rider who was sporting a Ragbrai jersey. She was waiting on her companions (three who were behind her a few miles), so we had the chance to chat for a bit as they caught up. They were all from upstate New York and she had attended Ragbrai for her first time last year. She was trying to convince some of her friends to come and try the ride this year. So far, no takers. A very pleasant visit.

The Mormon Church as had a long history in this part of Arizona and have placed numerous historical markers up along this route. The indigenous Apache Tribe is not portrayed in a good light in most of these markers. The Mormons take credit for “Bringing Law and Order” to a savage land. I guess it’s true that the winners always get to write the history.  The current day Church of Latter Day Saints also had a very imposing Tabernacle in the small town of Fort Thomas. 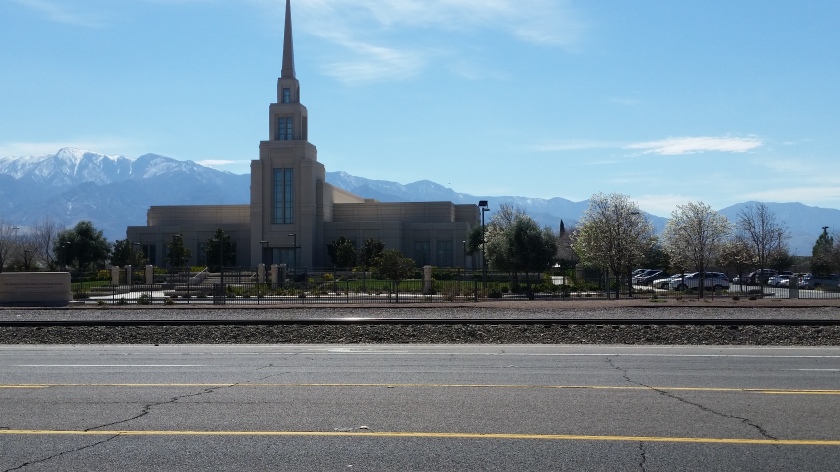 We knew from the map warnings and the map atlas recon that we had done that finding a comping spot for the night  was going to be a problem. The 70 – 80 mile range for the day was going to put us on the Apache Indian Reservation, no camping, and even a 100 mile jaunt would put us basically in the middle of nowhere. So, we opted to quit the biking at 80 miles and drive STella on until we found a campsite. We scored the final spot in a neat little brookside campground in Globe, AZ. The town was given its name from an incredible solid silver globe-shaped natural specimen dug up by two prospectors in the late 1880s. The actual ball of silver now resides in the Smithsonian in Washington D.C.

We are less than a block from Holy Angels Catholic Church which conveniently has an 8 o’clock Mass in the morning. How sweet is that?

And, we don’t mess with that silly clock changing thing that all the rest of the country is going to be doing tonight.

A good night to all, and we’ll be praying for you and for us in the morning.

5 thoughts on “Westward Across Indian Lands”