Big Bend is so huge, and so remote, but you find the nicest people in these small, secluded campsites. We are pretty much “like-minded” folks, or we wouldn’t be here in the first place. Ken and Cassandra from Idaho bicycled in today from the western edges of the park. They are the “hard corps” kind, and were carrying not only their camping gear and clothing, but enough water to get them thru a hard day of riding on some extreme hills, how about a 15% slope for more than a mile! There just are no places other than the campgrounds to get water, so having adequate water is the defining thing. We had a lovely conversation and they were intrigued about Ragbrai. Maybe we’ll see them in Iowa someday.

A very chilly night close enough to the Rio Grand to hear it gurgling along its banks. The Mexican side of the river is all private land, and ranchers graze their cattle all along its banks. It’s a very shallow river through here and the cattle don’t worry about “papers”, or the Border Patrol. They meander pretty much at will across the river and graze on American grass whenever they have the urge. The Park service, as a result, has erected a barbed wire fence on our side of the river to keep them from straying into this mammoth, unfenced wilderness. Peaceful coexistence can happen 🙂 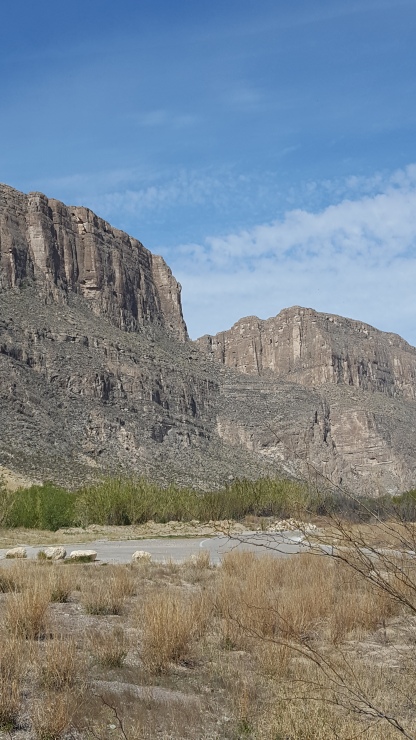 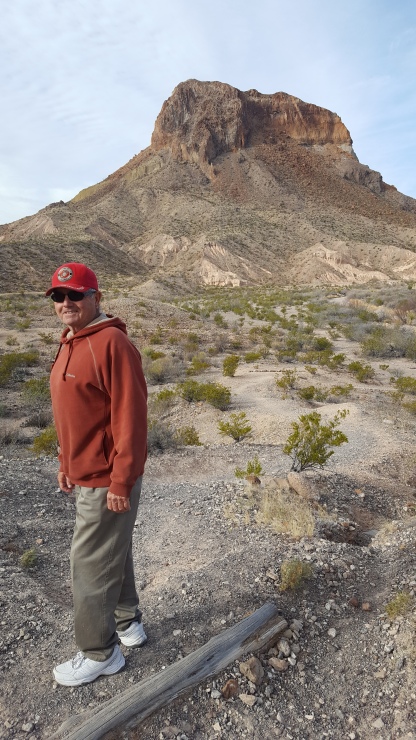 Since we had to focus on getting our campsite yesterday, we passed up some very interesting looking trails and locales. We backtracked the way we had come yesterday and started pulling into the many pull-offs near these prime places of interest. It’s hard to know when to stop taking pictures, there are just that many sites screaming to be photographed. The first pull off was at Tuff Canyon, and we spent more than an hour there exploring it and trying to make sense of the geologic gymnastics that produced this awe inspiring place. 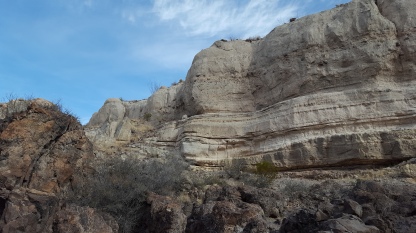 Like nearly all major rivers, the Rio Grande “changes its mind” over the millennia on just where it wants to meander. Numbers become meaningless when talking geologic time, so suffice to say, a long, long, LONG time ago, the river left what had been its path for eons, and decided to cut a short cut across the rocks and canyons. In so doing, it created what is now called Santa Elena Canyon, and words just can’t describe it. I’m going to include a whole batch of the pix we took while walking the exciting 2 mile hike up into the canyon. 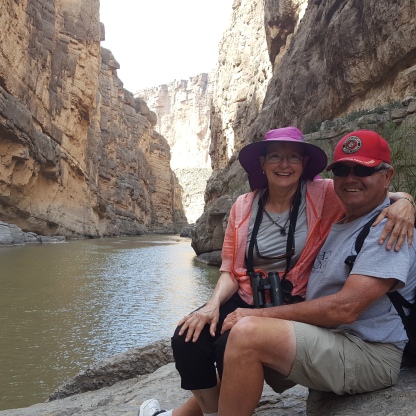 We spent over 3 hours on this “hike of a lifetime” and enjoyed every minute of it. To top it all off, at the very end of the hike (could go no further without resorting to mountain climbing) Cathy was able to add yet another bird to her revered “life list”. A canyon wren was singing its little heart out and it was truly music to Cathy’s ears. Make no mistake, this is BIG STUFF, folks 🙂

This expedition resulted in a “change of plans” for tomorrow. We had planned on doing a “Round the Bend” jeep tour along some of the unpaved old roads that served the remote ranches before the land became a National Park in 1944. After seeing the canyon, we switched to a river trip up river thru the canyon we walked today. We are totally excited about this prospect! Stay tuned!

The “Ghost Town” of Terlingua is just down the road from our RV park tonight. We briefly toured it and marveled at the folks who have “re-populated” it. An interesting breed, to be sure. Life was very hard here for the folks who lived and worked here in its mining heyday. Even as hard and dangerous as it was, the people who came here from “south of the Border”, found it a much better place to live than where they had come from.

There is only ONE gas station for 100 miles in any direction. They charged $2.78 per gallon of gas. I paid it. Happily.

Forecast for tomorrow is much cooler than normal, so we’ll be packing along a lot of extra clothes for the river trip.

I’ll let you know how it all turns out. Stay tuned!

South of the Southern Tier, afloat!

2 thoughts on “Peeling Back the Layers of Big Bend”