Another surprising misty, moisty morning. We had expected a startling bright sunrise coming up out of the fantastic canyon we are parked so close to, but not to be. In all the thinking I had done regarding riding conditions out here, fog delays were NOT included. To be forthright about it, Cathy was not particularly disappointed as she wanted to get some more birding in on the desert trails leading out from the campground. Since I was planning on a 70 mile day, and the high for the day predicted to be 87, I didn’t want it to be much of a delay. Also, tho light, the breeze was at least in the right direction, and I always hate losing that sweet biker advantage. I’m going to include a couple of pix from our walk last evening down toward the canyon. Cathy is going to have a separate post covering this stay and also Judge Roy Bean at Langtry, Tx. 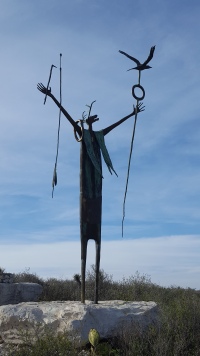 The stylized statue is a three dimensional version of one on the ancient (c.8000bc) rock paintings on the walls of the caves found in the canyon to the right of where I am standing. Only guided tours were allowed to see them, and we arrived too late in the day to go.

I rode out of the park a little after 0930, and Cathy was  going to stay and and walk more of the trails and return to the excellent museum that was available there. The difficulty of life in this region is hard to envision, from the earliest days to the current sheep and goat ranchers that still make their livelihood from this unforgiving and harsh land.

The overcast conditions kept the temperature from reaching its predicted high (I think), but the winds picked up and became contrary as the sky cleared. Federal highway 90 is the ONLY east west road across this part of the state, so that’s what I was on all day (and will be for the next several days). The shoulder is wide enough, but still very rough. The sparsity of the traffic allows me to ride on the traveled portion of the lane a good share of the time. I must be continuously alert for the sounds of vehicles approaching from the rear and zip back onto the shoulder. That’s relatively easy out here, as the sounds carry a long way in the dry desert air.

The only site calling out to be photographed was the crossing of the Pecos River. It was much bigger than I had expected, and its canyon was spectacular as well. There is an historic “High Bridge” that was built in the 1890’s to carry the Southern Pacific Railroad over this same canyon. It is still in use today by the Union Pacific Railroad. It was the highest and the third longest bridge in the US when it was built. Lots of history that goes along with all this, but, that’s another story for another day. 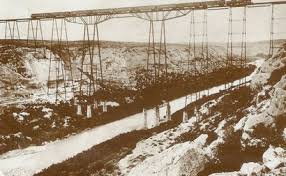 The highlight of the day was NOT the end of the day, as has often been the case. It was in the tiny town of Langtry, literally a stone’s throw from the Mexican border, and made forever famous by a larger than life character: Judge Roy Bean. The State of Texas has taken it on themselves to preserve this bit of history and has built a very nice travel and interpretive center. We weren’t prepared to be so impressed. I had another 40 miles to ride for the day, so I did the “hit the highlights” tour, and rode on west. Cathy spent several hours there and will do a blog combining it and the Seminole Canyon stay.

Closing comments for the day: There are SO many ranches for sale along this part of Texas. I’m seriously guessing every other ranch gate I saw (admittedly, they are few and far between), had a “For Sale” sign on the gate. And I can’t blame them. I only hope there is some kind of market for the land that will repay the generations of hard work that went into this life.

Spending  the night sandwiched between US90 and the Union Pacific’s train yard in Sanderson, Tx. Good thing I’m tired 🙂

Thanks for coming along.

3 thoughts on “West of the Pecos”