As crystal clear as the night sky was, it was a surprise and shock to wake up this morning in our very private “Picnic Stop” campsite to socked-in fog and drizzle. There were probably less than a dozen vehicles go by in the 10 hours that we had been parked there. A few curious cows were just the other side of the fence looking at us. This site was as phone-coverage free as it was sunshine free, thus no way to check with our weather connections via cell phone. When in doubt, wait. So we did. There was time for a second cup of coffee and the planning for today that already was on Plan B. As I’ve said before, the best chance a cyclist has to stay safe is to be seen. The visibility was at 100 yards or less, and even tho there hadn’t been hardly any traffic on this road, I didn’t feel like risking getting run over. So, after another half hour of dithering, we pointed STella west with bike and us aboard. When, if, the weather cleared, we would stop and mount up the bike. It was scary enough piloting STella around the hairpin curves, so the decision had been a good one. We stopped for fuel and ice and checked on the weather services at the station. It appeared we would have less fog, if not the end of the drizzle. No Catholic churches were even listed for this county, so Mass was unfortunately not an option. We did find a family owned/operated restaurant and it was at least the “brunch” hour, so we opted for that to earn a little more clearing time. That was a good choice as we had an excellent steak, homemade, in-house mashed potatoes, and pleasant conversation from the owner/proprietor/chief cook/pie maker.

It looked like things were going to clear up enough for safe travel, so I mounted up and headed more out, following the red line on the map. Cathy was still a bit concerned about how the weather would turn out, so she stayed relatively closer to me than normal, especially since we had zero phone communication. The road we were traveling was almost free of traffic, but apparently the US Border Patrol sees it as a likely route for unauthorized entry. There were more of their official vehicles on the road than any other traffic. We are quite close to the border with Mexico now.

The rivers we have been following, the Perdanales, and the Guadalupe, have been so surprising (to me) in their clarity and beauty. We keep saying to one another “they look like the rivers in the Rockies”. Their little tributaries and feeder streams are the ones I criss-cross over multiple times each day, almost always marked with a “flood guage”. The Nueces river was along today’s route, and it has it’s own character. It tends to “rage” more than the others in heavy rains, and the rock beds are spread out over wide paths. It also sometimes completely disappears into the rocks and then emerges down stream. 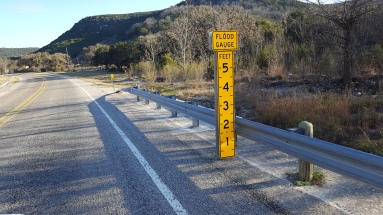 A typical canyon on the Guadalupe River: a river of nothing but stones!

I hadn’t commented before (I don’t think) on the standard practice in these parts of building 10 foot tall fences all along the ranch borders. I’ve been amazed by them, particularly the amount of labor and expense that building them would entail. And the “soil” the posts are driven into is more rock than dirt, so that job in itself would be daunting. The rational behind it, we were told, is that hunting the wild game that are on the ranches is often the majority of income the ranchers receive. We’ve seen a multitude of species, some native, some not, that are within these fences. knowing the ranches are in the thousands of acres category, the job and expense of fencing it all in must be huge. 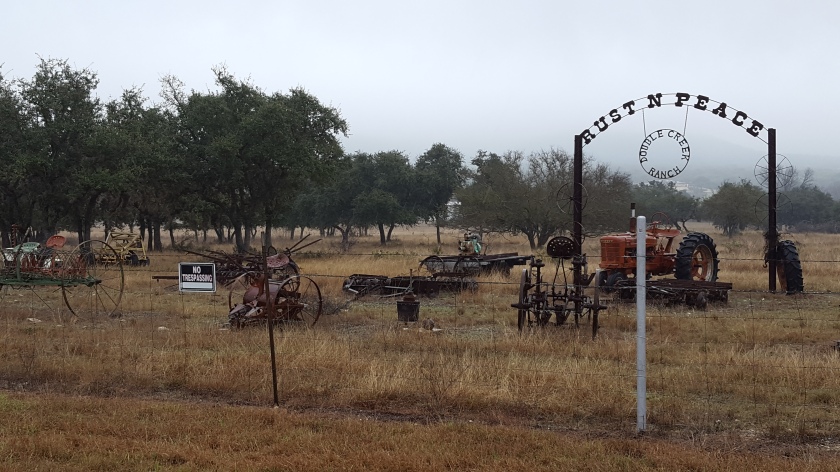 Our camp tonight in Del Rio discovered by Cathy tonight is a jewel! An entire former Army Cavalry Fort (Fort Clark), had been purchased lock, stock and Parade Ground from the US Government when it was closed as an active base in 1948. The forward thinking townsfolk have kept nearly all the very striking and solid buildings that were on the base and have converted them into homes and motels. There is a 9 hole golf course that meanders thru the post, and lucky for us, some of the pasture used to forage the cavalry horses was converted into a very nice RV park. It seems there’s always an “Iowa Connection” to so many of the things we have discovered, and this place is no exception. The 113th Cavalry Regiment of Council Bluffs, Iowa was transferred here in 1941 after the outbreak of WW2. Though they brought all their horses with them (they were Cavalry, after all), the Regiment and other horse cavalry transferred here left the horses idle and switched to the modern equivalent of cavalry with mechanized mobility.

A real treat was discovering the 1 million gallon natural spring fed swimming pool that had been built during the war years for the garrison. The crystal clear spring fed water into a huge pool that stays at a brisk 68 degrees year round. Though I was probably in need of such a dip after today’s rough-pavement ride, I opted for a warm shower just outside our camping spot for the night.

I always enjoy meeting other bikers that are on their own journeys. I hailed Kyle O’Hara down on the road today and was very empressed with his California to Key West, Florida ride. And tonight here in the Fort Clark park, I was pleased to meet and chat with Ken Bird, from Western Australia. He has pretty much been riding non stop for 6 months, and all the while pulling his 70 lb beautiful Husky mix, Flame, in the Burley trailer. Wonderful characters, all out here along the Southern Tier.

Postscript: Cathy here. I am in Del Rio, and at the last source of wi-fi we sighted, a Starbuck’s on the edge of town. We decided that I would stay here and get these last two posts out, since there is no telling when we’ll have wi-fi again. John has been writing these posts in the evenings, before the events of the day fade, and then saves them to post whenever we can. I will meet the biker later this afternoon at the Seminole Canyon State Park west of here. We’ll be on Highway 90 for quite a few days now. There aren’t a lot of other roads out here! We are enjoying the trip immensely and hope you are liking riding along with us!

2 thoughts on “At the edge of the desert…”