After a cool night and a rather tardy departure from the not-so-good-campsite at Sommerville lake, (showers literally too filthy to walk into)  the bike and I put rubber to the road. Plan B was already implemented with Cathy’s trip when we found that the planned route would not accommodate the height of STella’s frame.

These kind of things are not unexpected and fall into the “no biggy” category for Confident Cathy at this stage. She programmed in an alternate route and we made plans for the “meeting town” along the Way. Sunshine and fair temps were the order of the day, and were well received. The ever-important predicted wind speed and direction were not in the same category, however. The terrain and topography are decidedly different now, and the economy is definitely “cow driven”. To this farm boy, the vistas are a beauty to behold. 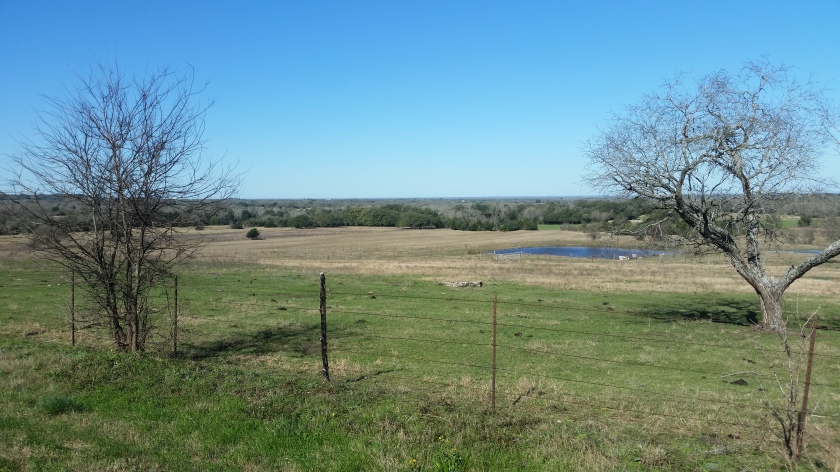 On this 30 mile stretch of winding two lane road, there were relatively new, million dollar (plus) homes every couple of miles. The long, elegant, gate-guarded lanes leading to the splendid houses had very “cowboy themed” names: “Longstar Ranch”, “Circle Bar D Ranch”, “Old Chisholm Trail Ranch”, etc. The road fences were of primed wood, or “sucker rod” steel, and all well maintained, and expensive to build. I looked closely at their cattle herds, which were good. But the life-time-cattle-producer in me had doubts about how these homes could be made possible by these herds. Once I quit gazing at the herds, houses, and fences and started looking farther back on the properties, I could see oil well pumping jacks. And oil storage tanks. And frequent pipeline notices along the roads. Ka Ching! And I was happy that my reaction was: “Well, good for them”. The Cowboy Ranch names just aren’t quite enough to fool everybody: As my dear departed wonderful friend Greg Morehead often said, “It’s hard to shit an old bull shitter”.

To put in perspective the incredible variety of things we see on this journey, in one day’s time, I spied a more-than-life-sized black gorilla (in the yard of a white-haired little old lady, nonetheless!), long horn cattle with horns more than 10 feet from end to end, the smallest still-active Catholic Church in Texas, and more antique outlets/vendors/purveyors/dealers than I knew existed, (and all in a ten mile stretch around Round Top, Texas). What a picturesque day!!

Cathy here: I had to add some more about Roundtop. It was pretty impressive for a town with a stated population of 90. The highway 10 miles either direction was lined with the aforementioned antique vendors, and Roundtop itself had dozens of “darling”-looking little shops, all in old tiny buildings from the surrounding countryside (themselves antiques) that had been moved in for the purpose. It was the kind of place any shopper worth her salt could have spent several days in! However, it’s Tuesday, and it seems that the entire place is closed up tight on Tuesdays! Aughh!!! They also have twice-yearly antique “festivals” that draw thousands for a week of high-intensity antique-hunting, and it’s a good thing we didn’t run into that crowd as we biked through! 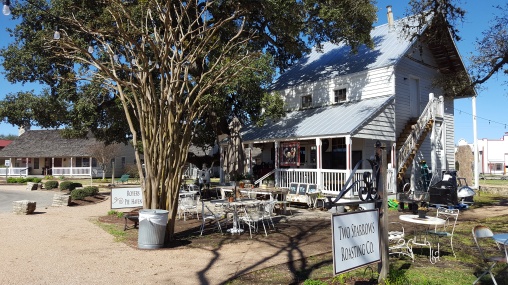 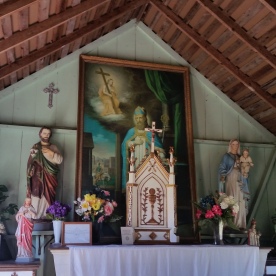 The tiny church was built in the middle 1800’s by the German immigrants who settled nearby. As in all the other parts of the south and Texas we have visited, Catholic Churches are more of a rarity than commonplace. As you can see by the picture of the tombstone, the inscriptions are all in German. I visited with a young family there who, though not Catholic, have stopped at the church on their yearly trips to family from Houston. Their first stop had been on their Honeymoon. They had four pretty little daughters with them on this trip. I signed the book requesting prayers at the next scheduled Mass.

The wind increased in intensity and adversity as the day wore on. Luckily, my route to the campsite in Buescher State Park was shortened by the local knowledge of the County Sheriff Deputy that I had stopped to ask for directions. As (good) luck would have it, he was parked on the very best “short cut” to the park, which saved me several more miles of already-tired-riding. Better to be lucky than smart. Again.

A gorgeous campsite here tonight, with temperatures as ideal as could be hoped for! Potato soup, cold beer, and fruit for supper. I saw a roadrunner as I biked to the campsite. The first of this trip, and totally unexpected!

All’s well on the Southern Tier!

Keep those prayers coming. God’s got his hands full these days with lots of stuff.