Hi, all–Cathy here. I had a great day yesterday visiting several old plantations along the Mississippi near St. Francisville, Louisiana and wanted to share them with our readers. Both of these homes are owned by the state and are so fortunate to have almost all of the original furnishings with them, and so are described as “Historic Sites”.  Maybe because the weather was chilly, I happened to be the only person visiting at each of the houses, so I really got individual attention from each of the tour guides and could look all I wanted!

I was particularly excited about the first, Oakley Plantation, because it is the place where John James Audubon lived as a tutor for the daughter of the family and produced over thirty of the bird paintings that would go into his famous “Birds of America” folio. And he did it in just four months! I’m not sure how much instruction the daughter actually received. Oakley was built in 1805 and reflects the Federal style of the time, not the antebellum look we often associate with plantations. It is simple in style and not really large at all, especially by today’s standards, four rooms on each of three floors. One floor is actually the “basement”, made of brick, to keep the building cool and out of the damp earth. This is where Audubon stayed when he was there. The upper front porch, often used for sleeping, is a West Indies style, with louvers. These force the incoming air up and against the curved inner ceiling to roll it down across the sleepers. Not quite air conditioning, but nice for the time. 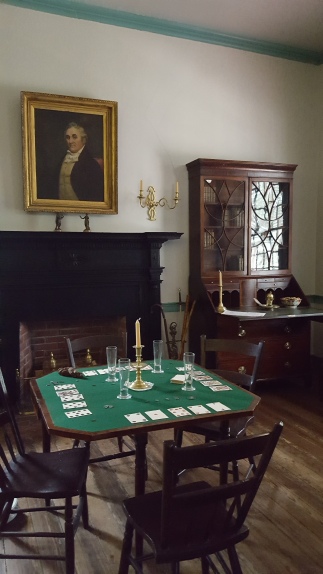 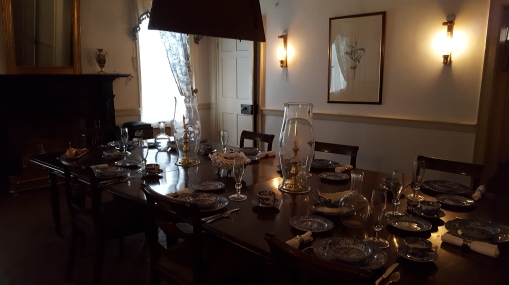 The “simple” life at Oakley around 1815. Audubon slept downstairs on the right! ≈ The large flat”houka ” fan over the table was operated by a servant in the corner pulling on a rope to keep the flies shooed away.

The furnishings at Oakley were simple in style and not too many of them. The owners were some of the most wealthy and influential people in the territory at the time and entertained many local and national people. Slave labor, of course, fueled the economic engine of the plantations, and around 300 worked there, producing cotton and indigo. The grounds were beautiful, of course, and there must have been hundreds of cardinals there, filling all the trees. And the trees! I don’t think I’ve mentioned how magnificent the live oaks and pines of the south are, the oaks, especially. They are just amazing, with limbs stretching out seemingly forever. 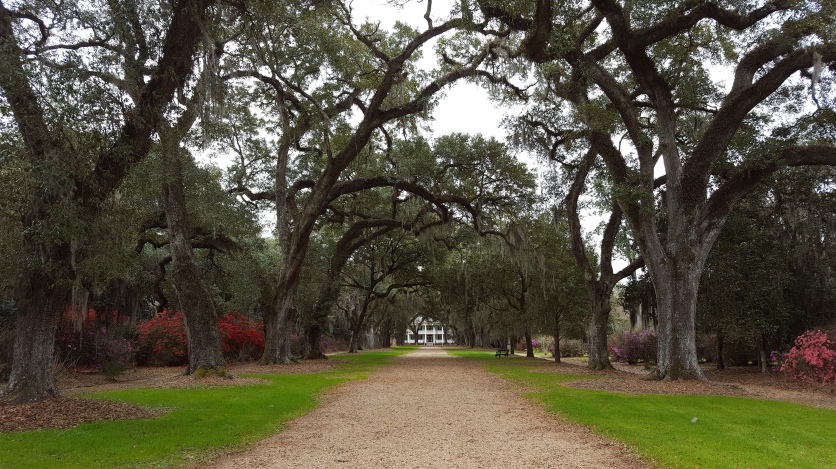 Elaborate early Victorian-style furniture. ≈ Part of the original French wood-block printed scenic wallpaper in the entry; only four of these exist, the rest are in Europe. It was actually made in 1820, before the house was built. ≈ Rosedown’s oak-lined allee, backed up by multiple azaleas and camellias.

Rosedown, just a few miles away, was an entirely different kind of building. Remember the girl Audubon was tutoring? She ended up marrying the heir of Rosedown and living her life out there. It was built in the late 1830’s, and more closely resembles our notions of a plantation home. Direct heirs of the original owners lived there until 1955, when a Houston woman purchased it and spent $10 million restoring it to its original appearance. This included the 27 acres (yes, 27 acres) of gardens surrounding the house. More about those later. Again, all the original furnishings and accessories, and they were spectacular, were still in the house. Now we’re in the Victorian/Antebellum era, and it shows. Putting on a display of wealth was expected. Again, 450 slaves worked 3500 acres to produce the cotton to provide all of this.

Of course I enjoyed seeing everything inside the house, but what really wowed me were the aforementioned gardens. I almost did like a southern belle and swooned. It didn’t hurt that the hundreds of azaleas and camellias were in full bloom, underneath the high canopy of live oaks and longleaf pine, as well as the very large formal gardens with conservatory and greenhouses. Did I mention the azaleas and camellias? And the central allee of huge live oaks, planted in 1830, did a fair job of leading one up to the front door. Definitely swoon worthy. All in all, a great day!

One last picture of the azaleas!

Life in the camper–we are enjoying being vagabonds, but have not left the 21st century, as was brought home to us last night. Getting ready to sleep seems to involve most of all finding enough electric outlets to recharge all of our electronic “necessities” and making sure we have the right cords on them. And you wouldn’t believe how many blinking and flashing little lights those chargers produce. Not a problem in a big house, but in one tiny open space, they drive me nuts! So I have to make sure they are all covered or inside a storage compartment, and that takes more than a few minutes.  I like it dark at night!

2 thoughts on “An Audubon Delight”