We enjoyed a great breakfast with Jerry and Pat O’Neill. They had coffee, bagels, fresh fruit and orange juice (this IS Florida, don’t cha know!) all served up for us at 0730! I warned them that bikers were a lot like stray dogs and cats, if you feed them well and treat them nice, it’s hard to get rid of them 🙂

It took a little longer than normal to recon today’s route map, knowing that the first priority was making things easy for Jackie and Richard to be able to take off early on Saturday morning. As usual, Mr. Google is always at the ready to help find the places needed to re-provision the rented RV. We picked two possible end sites, and would leave it up to Cathy and Carol to make the call when they arrived there.

Today was another planned 55-60 mile day. I’ve mentioned before how attractive the many railtrail/bike paths have been. Todays bikepath had been constructed apparently at the same time as the county asphalt road. It was pretty much “ungraded” and had more undulations than we have been accustomed to on the railtrails. I thought it was so great that the counties (it extended from one county well into another, also surprising!) had thought to include this in their planning. Admittedly, it’s a lot more financially feasible here than at home since the trails can be used literally year around and the grading costs are so much less here due to the sandy nature of all the soil. Still, it was much appreciated.

We have come far enough into the “panhandle” of Florida to notice changes in geography and flora. There is actually a little “roll” to the topography now and more than once or twice, I was able to coast! For the first two days, the only “hills” were overpasses and bridges, the rest of the time was spent on straight, flat highways (or straight, flat bike paths). Except in the swampy areas, the primary vegetation is pine trees, either natural or planted as a crop for pulp wood. We saw not a single field of truck crops for the entire day.

Cathy and Carol had the opportunity to visit a couple of the great State Parks that were along their support route today. Ichetucknee Springs park is well know regionally for the river sports provided by the mammoth spring. It is close enough to the University of Florida at Gainesville to attract mobs of students for “river tubing” in the warmer months. The river disappears underground, at “River Sink”, of course, and reappears at “River Rise”.

Spending quite a lot of time riding alone (to get used to the many days of that ahead), I thought a lot about the people I had encountered in my travels here. The realization came as a pleasant surprise (small minded of me, I know), that here in Rural Florida, the people were as open and friendly as our rural folks back home. As a matter of course, I give a little wave to every vehicle I meet on these little-used country roads. Fully 75% waved back. At the convenience stores and local eateries, conversation came easily and with good humor. Twice while sitting in the shade at the side of the road waiting for Jackie and Richard to catch up, cars would stop and inquire if I needed any help. On both occasions of asking for directions of police officers, they were not just courteous, but outright nice. All of this makes me happy!

Another good eating choice today for lunch, and how could we NOT stop here: 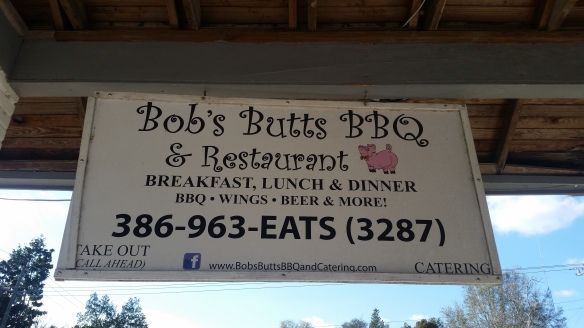 Nice camp along the Suwannee River tonight! Will explore part of it tomorrow. So, even though Stephen Foster NEVER was here, we are!

Last note, our Miami friends had not heard the phrase “Shut the Front Door” as we mid-westerners use it in an exclamatory nature. This little sign was on the counter of the restaurant. I arrived after the others and Richard graciously invited me to sit while he went back, Again!, to shut the front door. The waitress dutifully went and opened it again to provide our fresh air. Explanations of our colloquial expression cleared the puzzlement of the Miamians 🙂 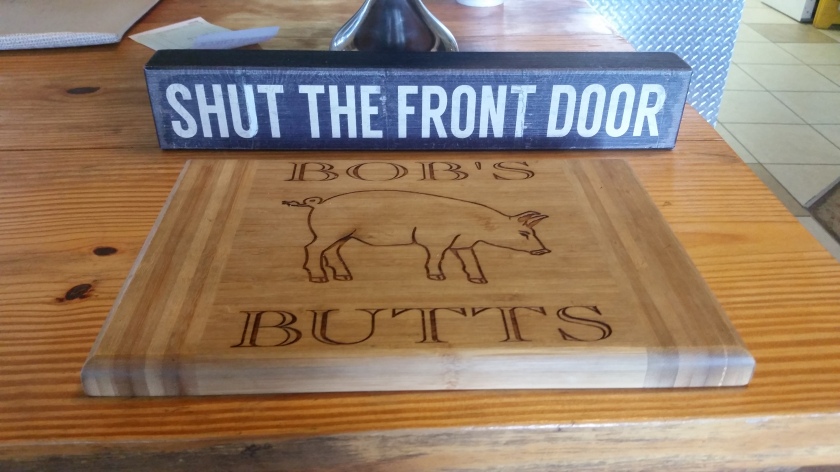 Tomorrow brings on the first day of riding alone. Bring it on!