Loving St. Augustine! As mentioned earlier, not a really big city with just 13,500 full time residents, but truly alive with history and and welcoming attitude. Yes, the town fully depends on we “tourists”, but in contrast to many places of the same persuasion, those here seem sincerely interested in making your stay a pleasant one.

Starting this post with last evening activity, another movie! This may not seem like special enough to be mentioned in a blog, but keep in mind that normally, we see 3 to 4 movies a YEAR! Now we’ve seen two in two days! Many of my audience here I know for sure are Baby Boomers. I’m asking you to either take your grown children, or at least encourage them to go on their own, to see Hidden Figures. I’m guessing they will come back and say “it really couldn’t have been like that, could it?” And we will have to tell them “yes, it was”. And then they should take their children, so that they will know. This is a fabulous movie. Go see it.

Even with the ample amount of time we have had to explore here, we realize we’re not going to be able to “see it all”. Yesterday’s valuable hours were eaten up by a 2 hour return trip to Cocoa Beach to check in with the RV repair shop that had ordered the refrigerator part for us last week. Again, good to their word, the part was in at the appointed hour and was quickly installed by Paul, the head mechanic. As an aside, I have found that wearing my USMC cover (hat, for soldiers and sailors), all the time has reaped unexpected rewards. Case in point, Paul’s chief mechanic had a “Once a Marine, Always a Marine” sticker on his roll-away tool chest. That required the obligatory “Semper Fi” from me. An almost universal rapport is created with his “Do or die” response to me. He takes an interest in the repair being done and lends a hand without any request from Paul or me. Priceless. In no time we’re given the “good to go” sign, and head back up north on the I95 “go fast or go home” super highway.

With the heart of the day already shot, we head back to “Old Town” and do some in-depth checking out of the things we had walked by in previous days. Of particular interest was the former Ponce de Leon luxury hotel, now Flagler College. Any mention of Florida’s development is incomplete without the mention of this larger-than-life character. A former partner with John D. Rockefeller in Standard Oil, his incredible riches from that oil monopoly giant were lavishly invested in the Atlantic coast of Florida.

He had the clout to seek and demand the best of builders, architects, and craftsmen. He was self-taught in the newest engineering and technology available at the time and did not shy away from trying things never done before, and on a grand scale. His new construction would be the first ever in Florida totally constructed with poured concrete.
He could even lure Louis Comfort Tiffany away from the moguls of the northeast to design, craft and install the largest collection of Tiffany stained glass windows anywhere in the world. He brought art and artifacts from Europe on a scale that would make the most wealthy of the world feel “at home” in this setting.

Having such a gem of a destination would be meaningless if there were no convenient way for the rich and famous to get there. No problem for Henry Flagler. He bought up all the separate pieces of the existing railroad running along the east coast and consolidated it into the Florida Eastcoast railroad. For those wanting to explore the immense complexity of all this fascinating subject, read “Last Train to Paradise”, by Les Standiford.

His success exceeded even his own high expectations and the Ponce de Leon was soon “overbooked” all to often. Solution? Why, build another hotel, of course. One more directed to “fun and games” and other high entertainment. The Alcazar was as opulent as the Ponce de Leon, and to top it off, contained the largest indoor swimming pool in America. Steam rooms, hydro therapy spas, exercise equipment, elaborate massage and “electro therapy” areas were the newest of the new in that era of the gilded age.

A born-poor son of a Presbyterian minister, his life was plagued with personal misfortune. One of the most grievous tragedies was the simultaneous loss of a new born grand daughter and her mother, Henry’s deeply loved daughter, Jennie Louise. Even as the Ponce de Leon was being built, he advanced the design and construction of a magnificent Presbyterian church in her memory. He demanded of the contractor that it be built within a one year time frame of her death. The contractor hired 1000 workmen and the structure was opened and consecrated 361 days later. Before he was finished with building, he had commissioned and constructed five more churches for Saint Augustine. Remarkable, in any age. 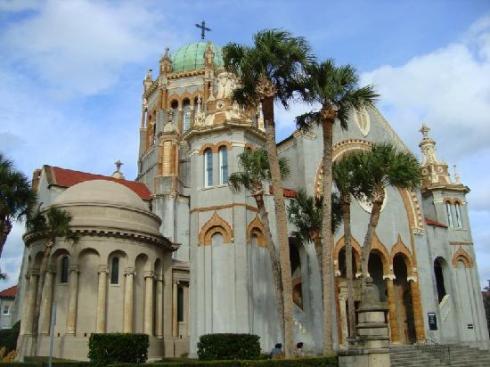 We are anxiously awaiting the arrival of Jackie and Richard Greenberg in our campsite. We will set out together TOMORROW to begin this long-sought quest of mine. Along with their cousin, Carol, the RV driver,they plan to accompany me riding for the first three days of journey. It’s going to be a great ride!

4 thoughts on “The End of the Beginning”